The future of: children’s digital play
Does technology use impact child development and what does this mean for our future? We ask an expert.

“The Future Of…” series asks a variety of UOW experts and researchers the same five questions, to provide insight into the potential future states of our lives, communities and world.

Dr Irina Verenikina is an Associate Professor in educational psychology within the School of Education at UOW. She has a longstanding expertise in researching educational technologies from the perspective of sociocultural psychology.

Irina’s research into technology use at the Early Start has been conducted in collaboration with Prof Lisa Kervin and other colleagues at UOW and in the UK; and has been supported by two ARC Discovery grants.

What are you researching or working on in 2019?

My research investigates the use of digital technologies in education, and most recently - the use of emerging mobile technologies such as tablets (iPads and smart phones) by young children.

With tablets becoming increasingly accessible and affordable, they are now used by children from very young age for recreational purposes. Our research has looked to understand the impact this has on their psychological development and future learning.

Research has demonstrated that the development of a young child’s brain is largely shaped by imaginative play created in spontaneous and free manner. Acting in imaginary, ‘as if’ situations advances children’s language, advances ways of thinking, and builds self-regulation skills essential for future academic success.

However, it has been noted that children’s play is currently being re-shaped by the use of digital tablets which we label ‘digital play’. Digital play is significantly different from traditional imaginative play, by the way actions are directed. Many apps are designed with a structured outcome that children must work towards. Traditional play is free and self-driven, in which children just do whatever they can imagine and imagining is the most important part.

If an app is over-structured and presents very limited choices, than child’s use of imagination might be jeopardized. The design of the apps is essential to how it will affect their development. Different apps might restrict or encourage the developmental process.

We are also currently embarking on an ARC funded research project led by Prof Lisa Kervin where we are looking at children’s communication with teachers when using digital devices.

In regards to your field of study or expertise what are some of the most innovative or exciting things emerging over the next few years?

Children’s digital play, and the use of various digital technologies in general, are going to become more advanced and sophisticated. One of the most exciting things I hope is going to emerge is that children will become increasingly able to freely create their own play in a digital space.

This won’t happen overnight, and educators, researchers and designers will need to collaborate to create suitable solutions. We have been working towards this with the creation of the “Tiny Town” app. Developed by kindergarten children with the guidance from a PhD student, the app was launched and was featured in various media sites

While becoming more advanced, the digital play of young children will deliver some advantages for children’s development which are not possible in traditional play scenarios with physical toys. Such advantages have already been researched in relation to a simple constructive play.

There are numerous advantages of digital play, take the construction blocks, as discussed in the article above, as an example. With digital blocks with most obvious advantage is mobility, where the player is not limited by space, time or resources necessary for physical block play. Then children can engage in it at any time and place their families might need. Another advantage might be the ease of manipulation of digital blocks which provides opportunities for children’s creativity. Digital constructs also allow the social aspects of sharing their creations with other players’ online, encouraging communication.

What are some of the things readers should be wary of over the next few years?

The increased use of digital tablets by children has inevitably stimulated a rapidly increased market of apps designed for young children. These apps significantly vary in quality, so families and educators need to be making an informed and thoughtful choices before downloading on the app store. They need to be aware of the commercial push for some developers, and not to fall for marketing spin.

Another thing which may be important to keep in mind in relation to young children playing apps is the effect of digital technology on human interaction. Our preliminary findings demonstrate that some apps which are high in interactivity, can be quite distractive to communication. This is true for both the child and adults: it is not uncommon these days to see both children and parents absorbed by their own activities on their devices. This is problematic in a sense that caregivers and their children are no longer interacting as they would before digital play existed. These engaged, everyday interactions are essential for the optimal development of young children.

Another thing which comes up increasingly in this field is that children can become addicted to the use of modern digital technologies. This is not exactly the area of my research but I can see an increased concern in literature in the field of young children and technologies.

And last, but not the least is child protection. This is an important thing to keep in mind when allowing young children to access technology and the internet. With advancing digital technologies the ease for persecutors to contact children and talk to them is increasing. Children and caregivers need to be prepared for this, with discussions of possible risks and the establishment of clear rules before play commences.

Where do opportunities lie for people thinking about a career in this field?

The profession of early childhood educator is becoming increasingly important in our society. While the world is bombarded with so much information from the internet, and ways of being distracted, children need guidance from competent and educated adults. This is important because it is in the first three years of life when the foundations for personality and cognition are formed. This is a very rewarding profession if you want to make a difference in children’s lives.

Another exciting profession which is becoming increasingly popular is software design. The need for responsible, educated and informed developers driving the creation of developmentally sound apps for young children is desperately needed.

What’s the best piece of advice you can offer our readers based on your expertise?

My advice is for families and educators who deal with young children, and make decisions on access to digital technologies. When choosing apps for young children it is important to look for those which provide children with an opportunity to engage children’s imagination and make their own choices of what they can do with it.

Some apps provide over-structured, repetitive and restrictive environment which require the child to push the button and get some kind of a reward or a score. While such apps might be attractive to children, they are not productive for their development as they do not encourage imagination or creativity. These type of games are also built to become quite addictive, which can be detrimental to the child’s health and overall development.

In our research we developed a number of criteria for the selection of apps, based on leading theories of child development, and our own findings. They suggest that the apps should provide children with opportunities for open-ended activities, and allow them to explore those at their own pace and make their own decisions as they progress through their digital experience. In other words, the apps present opportunities for children to freely manipulate and control the app to ensure that they ‘produce’ rather than simply ‘consume’. We would suggest apps which provide opportunities for exploration, imagination and creativity- as opposed to recognition and repetition- a trait found in many so-called “educational” apps.

We would also suggest children engage in play collaboratively, not only as single player who ‘interacts’ with the device in isolation. Engaging in digital play together with friends, siblings or older members of the family is important. Playing the same app together or simply alongside each other stimulates young children’s communication, which is important at this age. Always take an interest in what young children in your care are doing in the digital space, share with them their experiences. Communication with adults remains one of the most essential source of children’s development.

Finally, it is important to keep in mind that young children’s learning and development occurs best in hands-on activities and they need plenty of exposure to physical toys and moving freely between the digital and physical worlds. It is better that young children play on the devices in an environment where they can move freely, for example sitting on a comfortable couch or even on the carpet, rather than at a table.

For more from Dr Irina Verenikina you can visit her UOW Scholars profile, which links to her papers and publications.

Image below sourced from the Illawarra Mercury 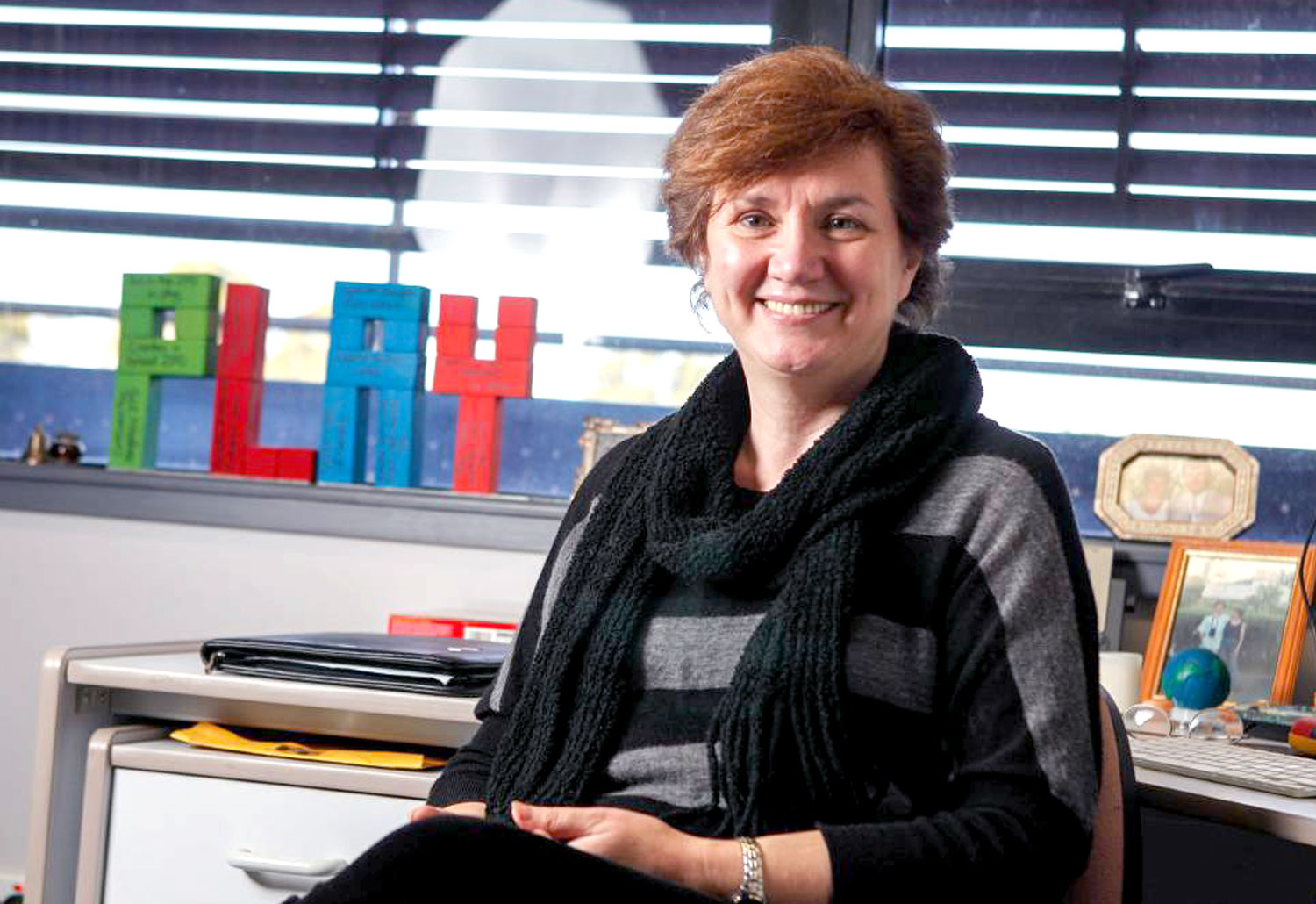 TO TOP
BACK
THE WOLLONGONG INFANT LEARN...
TO TOP