DEALING WITH DISASTERS WITH...
FUTURE OF: COASTAL WETLANDS...

Tucked away in a temperature controlled room in a building at the University of Wollongong, you’ll find a quiet achiever called the ‘Janet Cosh Herbarium’. An archival resource for botanical research at UOW, the herbarium is also used for teaching the next generation of environmental scientists about the anatomy of plants and developing their skills to identify and name the 3500 different plant species in the larger Sydney region.

The herbarium began with a generous bequest from an amazing local woman who was self taught in botanical research, Miss Janet Cosh. A resident of the southern highlands, she had a passion for natural history. Her interest escalated when she was almost 70 years old - and it was at this time when she did her most exceptional work in plant taxonomy for the region, which lasted until her passing aged 88.

Her bequest to set up a Herbarium at UOW in 1989 was the very first bequest made to the university and (as it nears it end) the integrity of that bequest has stood for the last 30 years. It’s an outstanding achievement that should be mentioned, and testament to the core team involved.

With Professor Kris French at the helm, the Janet Cosh Herbarium really took off in 1992. And along with Patsy Nagle the current acting herbarium curator, and Jean Clarke (a Fellow of the university and volunteer for the last 20 years), the team has seen it grow to become an incredibly important body of work of Australian flora, with a unique sub-collection of Antarctic mosses. 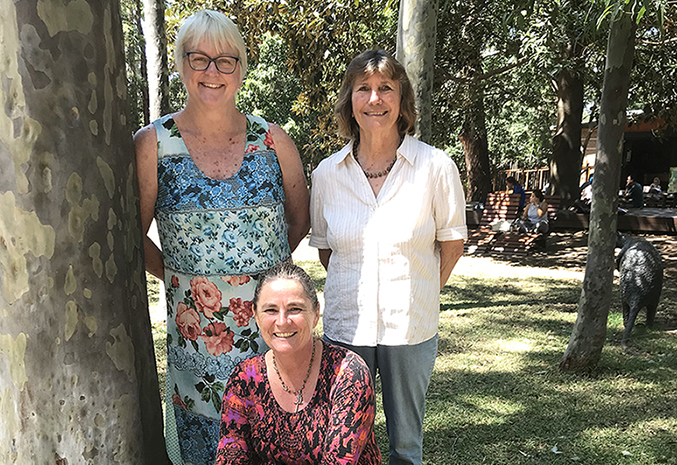 Unlike its counterpart, the impressive Howard Worner collection of rare minerals and rocks which is proudly on public display behind glass, the Herbarium is an accessible scientific collection of some 12500 plant specimens (enclosed in boxes), representative of our region, carefully identified and pressed in the very same way that pressing flowers was first documented in the 16th century.

“It’s a process that hasn’t really changed. But what we and other herbariums are starting to look at now is to take a genetic sample of the plant and store it in a vial. We are also looking to include a very high quality photograph of the specimen, since our database has the ability to include attachments like photos or art work.” Says the Director Kris.

The purpose of the herbarium is to be an accessible resource for students, researchers, and consultants, but also a platform to help save endangered and threatened plant species. As such there are many tasks required to operate the herbarium.

“As with any collection there is daily housekeeping. The curation of it is important to ensure it stays in good condition. How things are kept is really vital. The specimens need to be flat and contained from the environment. How we press and mount the plants, the sleeves we use and the identification of each is all very important. We freeze the specimens, and keep them in boxes in a temperature and humidity controlled space to protect them from fungal attack and insects. 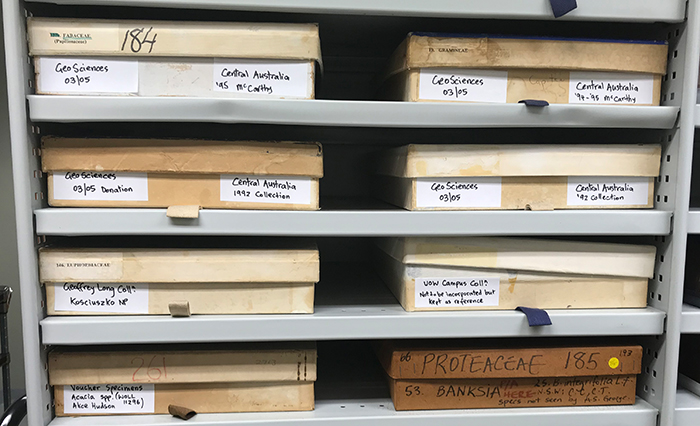 “There is a database we manage and that gets copied into the Atlas of Living Australian Database (ALA). This is uploaded every year to the National Herbarium and State Records to record what we’ve collected in that space of time.” says Jean.

The teaching component is mostly with 2nd and 3rd year students studying the anatomy of and identification of plants.  “As part of that subject students have an assessable herbarium of their own that they have to create.” says Patsy.

The specimens housed in the herbarium are mostly from the botanical research of UOW students and staff.

“The researchers who are publishing a paper on their work are responsible for bringing a plant specimen to us. This is called a voucher specimen which is the physical sample or proof of a plant connected to their research or part of a publication”. Says Patsy.

Patsy has also been collecting seaweeds and supporting the marine researchers and teachers. “We are currently experimenting on the different ways of pressing for seaweed. Like floating them in water and putting paper underneath them and lifting them to be in the form they would normally be.”

One of the biggest sub collections that they manage is Professor Sharon Robinson’s Antarctic moss samples used in her research to measure climate change. The mosses are collected and stored in small envelopes, dried and frozen while in the Antarctic, and transferred back to Australia under quarantine.

“That collection is not housed with the Janet Cosh herbarium since the mosses need to be stored at a much colder temperature. We manage the database for it but Professor Robinson keeps the collection in a special freezer.” Says Kris.

Unofficial partnerships with community members and groups have been vital for the development of the herbarium. There has been a collegiate association with Creative Arts students and staff over the years resulting in a few exhibitions, and there have also been exhibitions of Janet Cosh’s botanical illustrations and associated resources connected to Flowering Wonderfully, the Botanical Legacy of Janet Cosh published by JCH. These exhibitions were in partnership with the Curator of the UOW Art Collection.

Volunteer botanists from around the area provide guidance and expertise, such as Kevin Mills who was a friend of Janet Cosh and who used to collect specimens with her.

Leon Fuller, a horticulturist and previous Landscape Supervisor at UOW had a vision to plant the campus with local vegetation, with seeds he personally collected. He is now retired from UOW but maintains a keen interest in the campus natural environment and, in particular, the Janet Cosh Campus Tree Walk which was established in 2009. Brochures are available from the Herbarium with botanical information for people to do a self-guided tour of the UOW campus or walks can be conducted by arrangement with the Curator.

Perhaps the most official partnership is with the Office of Environment and Heritage and their Saving our Species project which the herbarium provides research support for data deficient or threatened plant species. “A research officer will go out to find the plant, cut a branch from it, bring it in and press it for the herbarium.” Says Patsy.

That is now a particular focus for Kris and Patsy - to find what gaps of specimens there are for the collection, and any other threatened species. Patsy and Kris work with volunteers and students to ensure the collection is a comprehensive record of the region - an area that covers the Southern Highlands, the Illawarra, east from Wollondilly, up to the river of Royal National Park and down to the Shoalhaven River.

Jean is currently liaising with the archivist from the UOW library to store, maintain and preserve the Janet Cosh Historical Collection for future reference.


Image below courtesy of  "Flowering Wonderfully: The Botanical Legacy of Janet Cosh" - compiled by Jean Clarke and Alison Haynes. 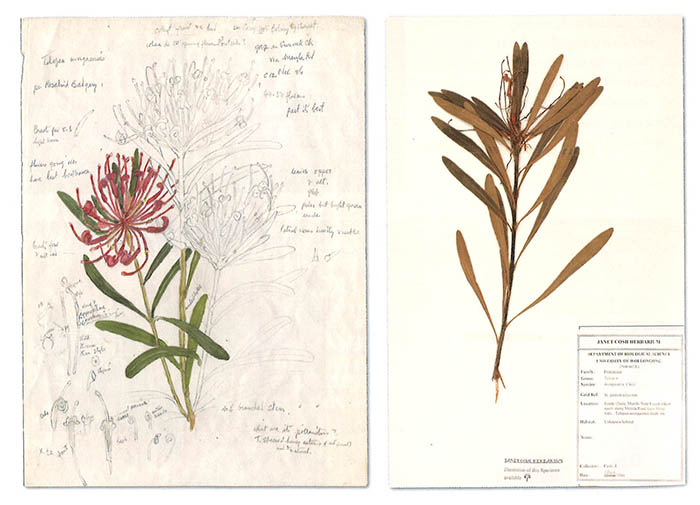 “We have 1500 botanical illustrations prepared and annotated by Janet Cosh, various field-notebooks, rare books she collected over time and school prizes she was awarded.

“The library has embraced the historical collection and I’m confident it will be well looked after.”

The archival collection will be a respectful representation of the legacy of Janet Cosh and an example of a large group of women from her era who have contributed to our knowledge of science in a quiet but very significant way.

TO TOP
BACK
FUTURE OF: COASTAL WETLANDS...
TO TOP