IT and Future Technologies: May
Innovations driven by computing and IT making an impact on society and the economy

Many of today’s innovations which benefit society and the economy are driven by computing and information technology. One such innovation with impact which kick-started UOW’s involvement in using social media for disaster management is the PetaJakarta.org project. Now managed by the Jakarta government, with involvement from Dr Robert Ogie from SMART, it is a UOW research impact which continues to develop as a disaster mapping service.

On the medical front, another IT software innovation developed at UOW provides a non-drug treatment for children with ADHD (Attention-deficit Hyperactivity Disorder), while researchers at the Centre for Medical Radiation Physics (CMRP) continue their research with silicon-on-insulator microdosimeters for cancer patients, and have recently been awarded the Farrington Daniels Award for their work.

Also this month we feature UOW’s Cybersecurity expert Professor Willy Susilo who will provide some research insight at the Institute of Cybersecurity and Cryptology (IC2) and a Global Challenges project - ‘Smart Garments’ which aims to investigate the feasibility of incorporating antenna arrays within garments for the purposes of communication, localisation and tracking, as well as health monitoring for individuals.

This technology, initiated by Dr Tomas Holderness and Dr Etienne Turpin, empowered citizens to report flood information through social media, and improved human adaptability to environmental disasters. The tool saved lives by enabling citizens and first responders to avoid and navigate safely through flood zones, and economic benefits were realised through cost savings from manual reporting and reductions in flood-related injury, property damage and disease.

This emergency response model is now seen as best practice by international agencies and has been further adopted by seven cities in four countries. The expanded disaster mapping tool now services the greater region of Jakarta and called PetaBencana.id. 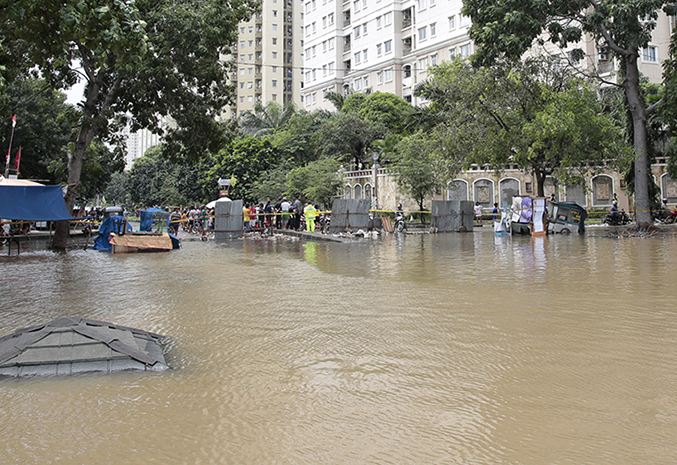 IT software “Focus Pocus” developed at UOW, is being used as a non-drug treatment for children with ADHD (Attention-deficit Hyperactivity Disorder) and provides a fun "wizard in training" themed environment to help children train to improve their memory, impulse control, and attention control.

To date, many thousands of children have benefited from using the software, and have experienced better behavioural control, better concentration in the classroom, and more effective completion of schoolwork.  “Parents and teachers have reported significant reductions in the typical symptoms of ADHD such as inattentive, impulsive, and hyperactive behaviours” according to Professor Stuart Johnstone.

This non-drug treatment, led by Professor Johnstone, provides an evidence-based treatment alternative and the possibility of an end to, or reduced levels of, stimulant-based medication (such as Ritalin) commonly used to treat the symptoms of ADHD which has worrying side-effects. The software was available commercially from 2013 to 2016 and has been available free-of-charge since January 2017.

Farrington Daniels Award for the CMRP

An outstanding paper on radiation therapy dosimetry, published in the prestigious international journal Medical Physics last year has resulted in Dr Linh Tran and Distinguished Professor Anatoly Rozenfeld and co-authors receiving the Farrington Daniels Award to be presented at the American Association of Physicists in Medicine meeting and symposium in July in San Antonio, Texas.

The published paper describes how silicon-on-insulator (SOI) microdosimeters developed at UOW have applicability in characterising heavy ion radiation fields and in measuring lineal energy deposition at sub-millimetre resolution. This allows us to better understand the radiobiological effectiveness of ions for improved treatments for cancer patients.

Authors and researchers Dr Tran and Distinguished Professor Rozenfeld have been invited to the US for the annual meeting to discuss their work and address other international experts in the field of medical radiation physics.

Finally we celebrate an open and web enabled database to help researchers worldwide visualise data (such as sediment analysis or erosion for example) via GIS applications.

The Open Cosmogenic Isotope and Luminescence Database (also known as OCTOPUS) developed at the University of Wollongong with funding from the Australian National Data Service (ANDS) is celebrating its 1st anniversary. An OGC compliant web-enabled database it allows users to visualise, query, and download geochronological data along with associated geospatial (vector and raster) data layers. Based on open source software and allowing for various levels of integration, there has been (to date) over 250 download requests from 50 different universities and research institutes worldwide.

Over the next five years, OCTOPUS will be supported by the ARC Centre of Excellence for Australian Biodiversity and Heritage (CABAH), resulting in an upgrade to the web interface, and additional geochronological data collections.

A search for International River Basins - Using the OCTOPUS Database

TO TOP
BACK
PHD STORIES: EZINNE IGWE
TO TOP