Dr Cammi Webb-Gannon is an academic activist and lecturer with the School of Health and Society at UOW and describes herself as pro-peace, pro-decolonisation and pro-Indigenous rights with a focus on the Pacific Islands region. She is also the Coordinator of the ‘West Papua Project’ in collaboration with Sydney University and has published extensively in the area of political activism in West Papua.  We caught up with Cammi to learn more about her research.

Q: How do you describe yourself?

I identify as an activist academic in several senses. First, I attempt to be up front about the political orientation of my research and my positionality in it. That is, I am pro-peace, pro-decolonization, pro-Indigenous rights, etc. I acknowledge my inherited positionality as a settler coloniser but I also attempt to transcend the strictures of this identity to work in solidarity alongside people who have been colonised. I conduct research that I hope will make a difference in shifting power imbalances in society and contribute to the agency of vulnerable and/or marginalised populations by bearing witness to the violence they encounter. I often find myself adopting the political positions of the people with whom I carry out research. For example, in my work with Indigenous West Papuans and Indigenous New Caledonians (Kanaks), I support their right to political self-determination and nation-statehood. I then use action research methods to promote this right. And, like many academics, I engage in activism relating to my research but outside of the academy. This has included participating in protests, organising community forums and talking with media.

Q: You publish in the area of political activism in West Papua – why is it important to advocate for the West Papuans?

West Papua often falls through the crack. It lies at the intersection between Asia and the Pacific, occupying the western half of the island of New Guinea, and, politically, comprising the easternmost province of Indonesia. Many people have never heard of West Papua, despite the territory sitting at Australia’s doorstep. It is very important to advocate on political issues in West Papua because, for many decades, the Indonesian government has put a ban in place to restrict West Papuans from doing so themselves (although West Papuan activists have successfully breached this ban through many brave and creative acts of civil disobedience).

Since 1969, Indonesia has maintained a military occupation in the resource rich territory of West Papua which is home to the largest gold mine in the world.

My research investigates how, despite experiencing decades of torture, rape, mass murder, land dispossession and cultural desecration, West Papuans have been able to remain staunch in their opposition to the Indonesian occupation and pursue their right to self-determination. This issue is particularly important at the moment as, over the past month, West Papuans have protested en masse in numbers never before seen, calling for a referendum--this despite Indonesia blocking the internet in the region and cutting off telecommunications.

The world is finding out about what is happening in West Papua. Research can add academic credibility to our nearest neighbours’ pursuit of their fundamental human rights.

Q: Can you describe the West Papua project ?

The West Papua Project is an internationally renowned think tank focused on conflict transformation in West Papua. It was established in 2000 by a group of concerned academics at the University of Sydney but has recently been transferred to UOW since I have taken up a permanent position here. Project personnel include its Convener, Dr Jim Elmslie, a political economist and Pacific arts specialist, its Special Advisor, Mr Ronny Kareni, a West Papuan community organiser, diplomat and musician, and me, its Coordinator. We work with West Papuan, Australian and Indonesian policy makers, media and key stakeholders to encourage productive dialogue between parties to the conflict, educate the Australian public about West Papua, advocate for West Papuan human rights in our publications and at relevant summits, and facilitate policy solutions to protracted problems in West Papua.

Q: You lived in PNG, is this where your interest in human rights started?

I grew up in PNG until I was 8 and since then have had a love of Melanesia. I later had a chance to work in PNG and in East Timor just after the latter’s independence. It was then that I started to take notice of the similarities between the conflict in Timor and in West Papua, and began to take part in advocacy for West Papua. This was to influence my PhD focus which examined the internal politics of the West Papuan independence movement, as well as my ongoing research. 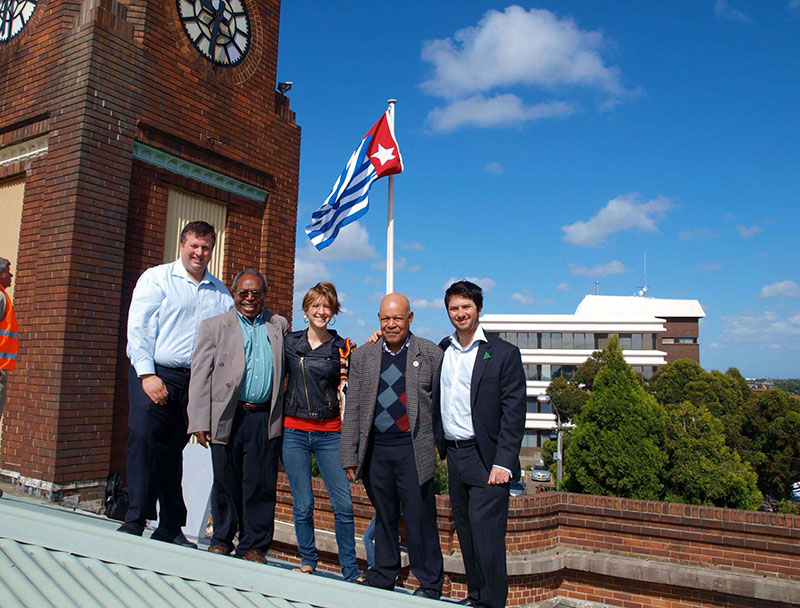 Q: You are one of the chief investigators for the ARC Linkage project ‘Music, Mobile Phones and Community Justice in Melanesia’ with Macquarie and Western Sydney Universities. Can you describe the project and share some of the important outcomes from the research?

Song is integral to community life and political and social participation in Melanesia. Increasingly, political messages and music have taken on a digital life with ubiquitous mobile phone use in the region. Our project has been investigating how music, circulated via mobile phones, facilitates community mobilisation for justice in Melanesia. The project has several significant project outputs so far.

The first is the production of an illustrated book containing the testimony of a group of West Papuan survivors of a massacre in 1998 on the West Papuan island of Biak about how they have survived and continue to have hope, and energy to work, for a just future. The book accompanies a CD of songs our project partner, the Wantok Musik Foundation, recorded of West Papuan, other Melanesian and Indigenous Australian artists singing and rapping about the massacre and its ongoing effects.

And both of these are included on an app one of the project’s researchers, Dr Denis Crowdy, has created so that people in Melanesia can learn about instances of human rights abuses in West Papua and circulate the information via song.

We are in the process of taking the app back to our field sites (in Vanuatu, Papua New Guinea and New Caledonia) to trace whether and how the app is used and the songs circulated. We hope to find out more about how this type of communication impacts on Melanesian advocacy for West Papua.

Absolutely! I took my own kids to the Wollongong climate change march. When people show up, skip work, shut down roads, and require the deployment of police resources and in other related ways slow down the economy over the course of a peaceful protest, the more the government will listen.
Mass action attracts media attention, broadcasting the voice of the people straight to the government. And even if it takes the government a while to process the message, these tactics raise the awareness of other citizens who may not otherwise have been aware of the issue at hand. Protests led to justice in the anti-Vietnam War movement, in the Indian Revolution, the American Civil Rights movement, and so on. But what is important is that people don’t just show up.
We need to sustain our advocacy in other important ways too—boycott companies that are un-ecological, change our own consumption habits, vote for change makers, donate to research and change-making organisations, and educate others. Importantly, particularly in relation to climate change, we should be following the lead of the Indigenous people in the areas where we live who are the traditional custodians of the land that is being destroyed through processes of industrialisation and practices of modern consumption.

TO TOP
BACK
NOVEMBER: EQUITY AND SOCIAL...
TO TOP