Growing up on the south coast of New South Wales close to the pristine, protected setting of Jervis Bay and the Shoalhaven River instilled in Dr Kerrylee Rogers a passion for coastal environments. 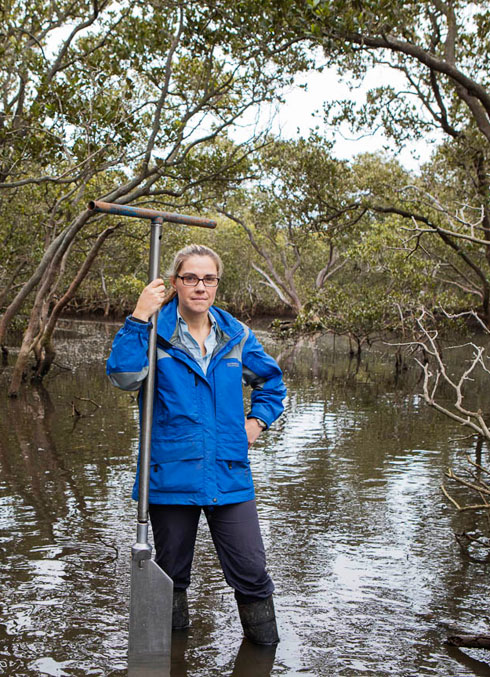 Rogers’ research focuses on harnessing the natural capacity of estuaries and coastal wetlands to adapt to climate-change induced sea-level rise and prevent further change through sequestering carbon from the atmosphere within living plant biomass and sediments.

Her research to date offers a surprising opportunity. It indicates that the overall vulnerability of coastal wetlands may be overstated, and if the inherent capacity of estuaries and coastal wetlands to adapt is encouraged, sea-level rise may provide prospects to increase carbon sequestration and actually mitigate climate change. The key is how we, as a society, support these ecosystems to adapt.

Rogers’ work in this area has attracted much interest, illustrated by her research record with 35 peer-reviewed journal articles, over 733 citations, 16 book chapters and one book. It has attracted funding from nationally competitive grant rounds as well as the National Climate Change Adaptation Research Facility and NSW Environmental Trust, among others. In 2016 she was invited to collaborate with colleagues as a Visiting Fellow at the United States Geological Survey, Wetlands and Aquatic Research Center in Lafayette, Louisiana, and contributed to workshops on carbon accounting convened by the Intergovernmental Panel on Climate Change.

After completing her PhD at UOW in 2005, Rogers returned to part-time work in 2006 as an environmental scientist within the NSW Government, which she balanced with raising her young children. Four-years later, she became the first part-time, contract-based employee to be appointed to the merit-based Research Scientist classification in that organisation, and in 2011 was awarded the Department of Environment, Climate Change and Water Scientific Services Division Woman of the Year for her work on the water requirements of plants and animals in the Murray-Darling Basin.

Returning to UOW in 2012 to undertake part-time work with Professor Colin Woodroffe researching climate change adaptation, Rogers quickly forged her own path and in 2013 was awarded an Australian Research Council Future Fellowship. Currently, she leads a Global Challenges project, Blue Carbon Futures, integrating research across four faculties focussed on the implementation of blue carbon as an effective mechanism for mitigating climate change.

Conducting fieldwork as part of her inquiries continues to connect Rogers with her research as well as with her childhood growing up in the Shoalhaven, providing ongoing motivation to develop an evidence base for softer strategies to mitigate climate change in coastal regions.

TO TOP
BACK
DR EMMA BARKUS
TO TOP